Balak Shah left Gonauli, Bihar in 2004 at the age of 18. The opportunities were low-waged, thus — he decided to find work in Kolhapur, Maharashtra. For fifteen years he was able to provide sufficiently for his family of seven. The lockdown was implemented in Kolhapur on 22nd March, 2020 rendering Balak and his colleagues stranded. After struggling for twenty-five days, the fifteen stranded men were able to round up fifteen thousand rupees for the Gram Panchayat; procuring a safe ride back home. 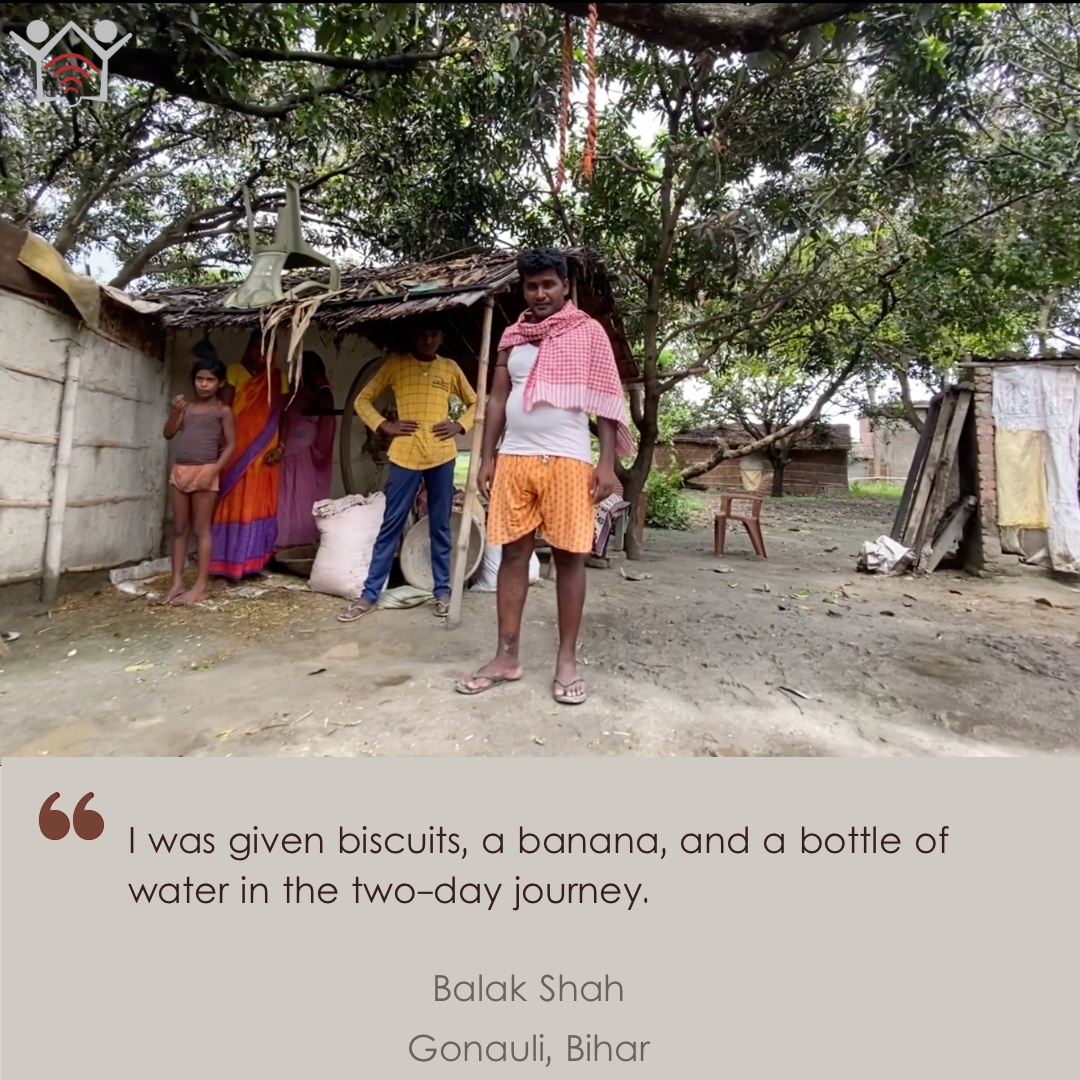 Interviewer: What information did you have about the virus and your journey to Bihar before visiting Gram Panchayat? Were you aware that the ride back home was to be free of cost for all passengers?

Balak Shah: My first update about the virus was through television news, and four days later, they declared the lockdown. At the time, I knew I had to maintain distance, always use a mask, and that the symptoms are: cough and chest pain in addition to fever, and possible breathing difficulty. At our first visitation to the Gram Panchayat, they said, “there are no seats available, you all go back.” It was through the instructions of others in the neighbourhood, we gathered fifteen thousand rupees amongst the fifteen of us and were able to secure a ride back home. I explored other ways in the initial days but there weren’t any.

Mrs. Shah: It is a bad disease.

Interviewer: How was your journey back? What were the difficulties you faced? Did you get any form of assistance?

Balak Shah: It took us twenty-eight days to organise a ride back home. Our company was shut abruptly on the day of official announcement. There were signs of work resuming. At the railway station in Maharashtra, I was checked at one of the Covid-19 testing booths. Once we entered the train — it was locked. No one was permitted to exit or enter. I was given one meal at the railway station in a four day journey. For the first two days we circled Maharashtra, only stopping at limited number of stations where they would give a packet of biscuit, a banana and a bottle of water. Each of us had a single seat. Prior to boarding the bus to our village the next day, I spent a night at the quarantine centre where they permitted us to go back home. There was no space there, ten people could barely fit while they tried to fit twenty people. Upon reaching the village, me and my co-workers quarantined in the school on the outskirts of the village.

Interviewer: Why did you choose to leave Bihar? Was there a significant difference in your earnings in Kolhapur?

Balak Shah: Someone from my village worked in Kolhapur – he helped me find a well waged job lifting sacks. I wouldn’t earn much in Bihar. Initially, depending on the number of trucks, I’d earn approximately Rs. 13,000 in a month. I would send back Rs. 2,000 but now I can send over Rs. 5,000 a month and save Rs. 2,000.

Mrs. Shah: I would have to curb my expenses depending on how much Balak sends in a month. With 4 children, maintaining the household is highest expense. It costs Rs. 4,000.  The company he works for does not always pay on time, and besides, due to pain or illness, I am forced to spend Rs. 700 on the doctor. Once, all of us were ill at the same time. We isolated ourselves since affording a doctor was not a possibility.

Interviewer: When did you first hear about Covid-19 virus? What do you know about the virus? 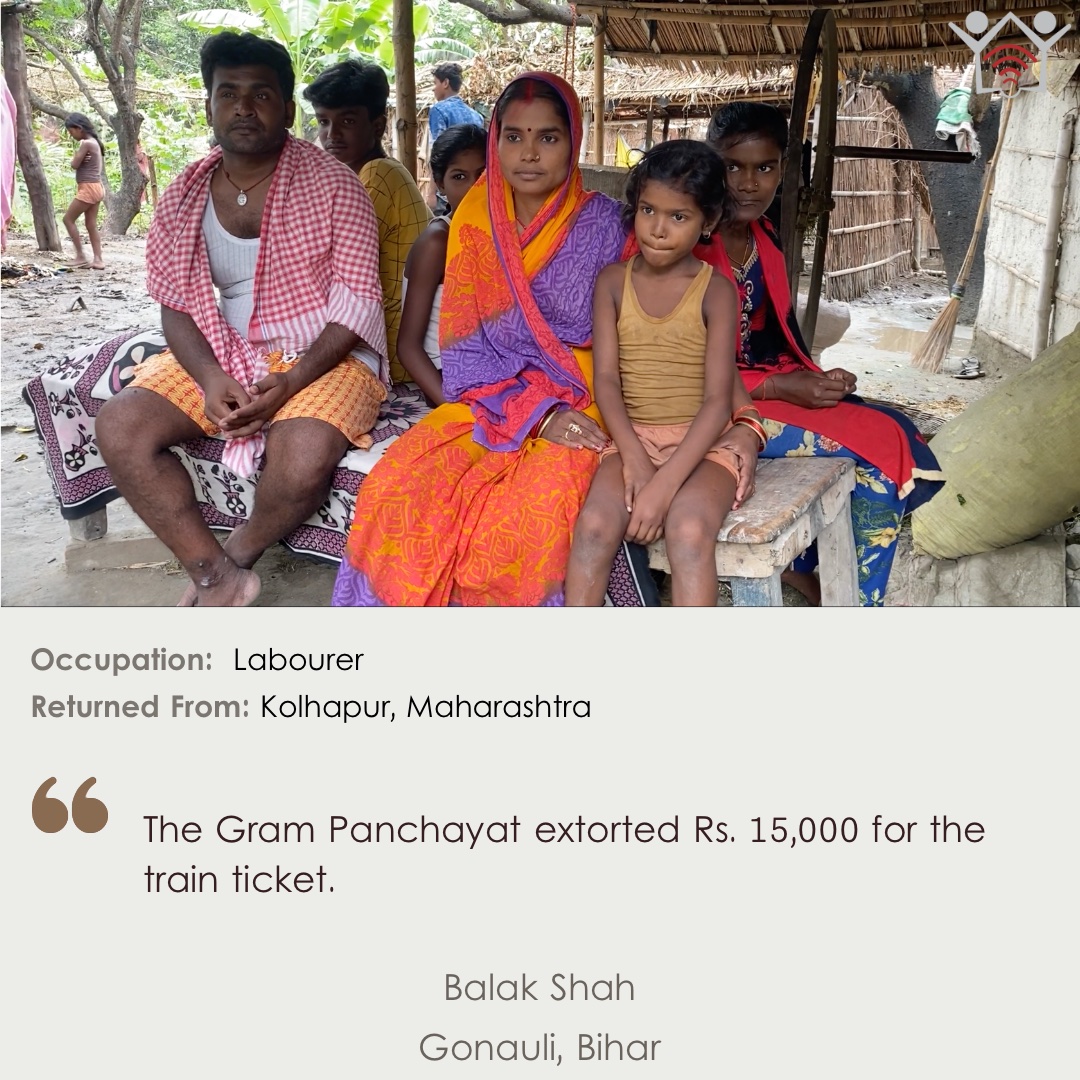 Balak Shah: All I knew at first was to maintain distance and always wear a mask. Later, I learnt the symptoms are chest pain, cough and fever. You might experience breathing difficulties as well. The work primarily depended on receiving goods from outside – to avoid contamination, everything was shut immediately. The only symptom my wife is aware of is fever.

Interviewer: What was your reaction to Balak journeying back and compulsory quarantine?

Mrs. Shah: I did not know anything till he got back. We were all afraid, but the isolating for a few days made sense. The workload at home increased as I was also taking food for Balak at the quarantine centre for 8 or 9 days. However, he brought the kids gifts, so they met him just 4 days later.

Interviewer: How has life been since you got back?

Balak Shah: I’ve been at home. I have been in touch with locals from Kolhapur, Maharashtra; they say things are still bad there. I wouldn’t want to go back. We weren’t able to procure vegetables but only flour as the mill happened to be in the neighbourhood. We also were beaten by the police for leaving our houses. It was bad there. I am considering starting my own business. I would require a loan of Rs. 2 lakhs to purchase the clothes and garments. In terms of assets, I should be eligible for a loan. I don’t own a cow, but I do have a house and the land it stands on.