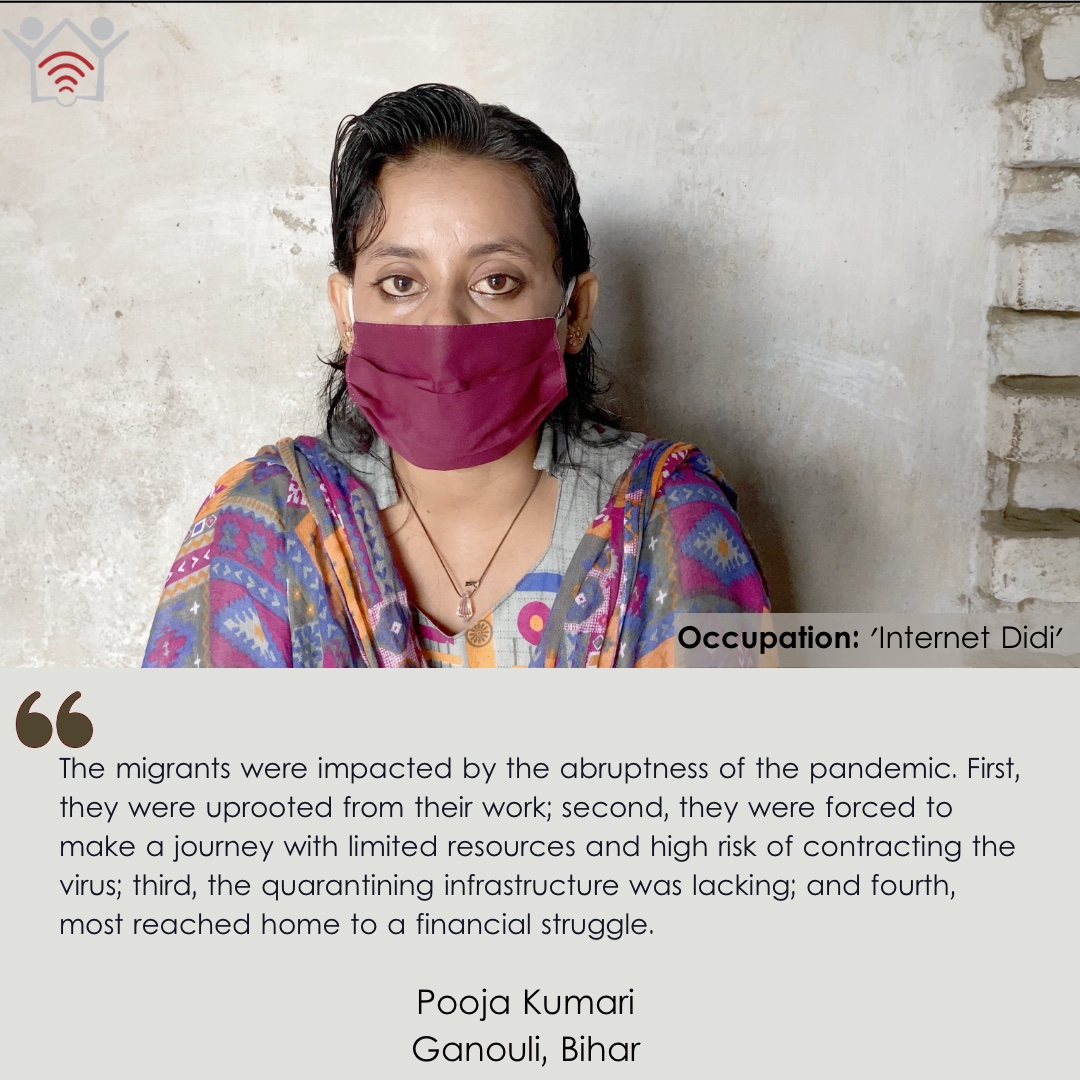 Interviewer: How has the state of Ganouli been affected by the pandemic?

Pooja Kumari: I worked in the village by helping women idle at home learn new skills such as, cooking and making incense sticks. First, I was training others, and I decided to move to Bihar to do the same for them.

A total of 94 migrants arrived in my area. These individuals registered themselves at the block, and the same is provided to us by them. While submitting appropriate forms is a requirement, there are about forty undocumented individuals who arrived.

The undocumented migrants shared that they arrived by cycle or on foot. People on the way were fainting because of lack of food and water, and most likely – the number of deaths due to the scarcity of food is higher than the number of death by Covid-19. During the journey, they were not provided with much assistance. Instead, they were pushed out or discriminated against. It was only at selected points they would get food. Those who cycled spent the last of their savings on the bicycles.

Interviewer: How have the people adapted to the Covid-19 virus?

Pooja Kumari: I believe the people know what the coronavirus is, its symptoms, the necessary precautions, and that there is no vaccine for it yet. Most say the pandemic is wide-spread in their place of work. Yet we have a mixture of those who adhere to the protocols, and those who choose to ignore it. I cannot go beyond advisory.

I never evaluated the facilities at the quarantine centre, but I know – the food they are given, and the doctor check’s in once a day.

Some refused to share their phone number and other details because they believe, we will report them to the police for arriving illegally during a nation-wide lockdown. Furthermore, some do not want to quarantine, and so, they turn their phones off or give wrong numbers.

The migrants were impacted by the abruptness of the pandemic. First, they were uprooted from their work; second, they were forced to make a journey with limited resources and high risk of contracting the virus; third, the quarantining process was not a delight considering the infrastructure; and fourth, most reached home with a financial struggle, and no employment. The crisis affected the labourers to the extent they cannot afford to plan their future as their sole focus is on surviving through the pandemic.

A change has been observed with those residing in the village as well. The individuals residing in the village, at the announcement of the lockdown, are afraid to meet the migrants, even after the quarantining process. While initially, the segregation between the two was recorded to be much higher. In the past few days, as there have not been any new cases, the fear is slowly tamed.

Personally, I have been making about 50 masks a day for the villagers without any external funding.

Interviewer: What is the state of digital infrastructure in Ganouli?

Pooja Kumari: Only a small number of villagers are proficient with the digital infrastructure. The majority of the population consumes the internet, but they do not understand how or its purpose beyond social-media applications. As ‘internet didi’, I educate the people on multiple uses of the internet.

Interviewer: How do you think the future is looking in Bihar? Are there any expectations from the government?

Pooja Kumari: I am hoping the government can provide more relief to the workers. I receive Rs. 500 a month in my account, but not everyone does. It is being transferred to the Jan Dhan Yojana account the majority of the village has. It is only accessible to those who performed the process of creating the account.

The job opportunities have always lacked in Bihar. Only a few can secure a long-term job while the rest suffer despite having an education. Whether or not the child will go to school is decided based on either the condition of the family. There are a few who simply do not wish to study, and some parents suggested their children contribute to their earnings. There are only two types of job opportunities available here: teachers and postman. While for a’s job you require a B.Tech degree, and for the postman, I am not sure.

We have assisted the local during the pandemic. However, some families do not allow the women of the house to work, despite having no sources of income themselves.

The future seems bleak for now as the number of deaths is constantly rising. In the meantime, we do what we can for the people of Ganouli.