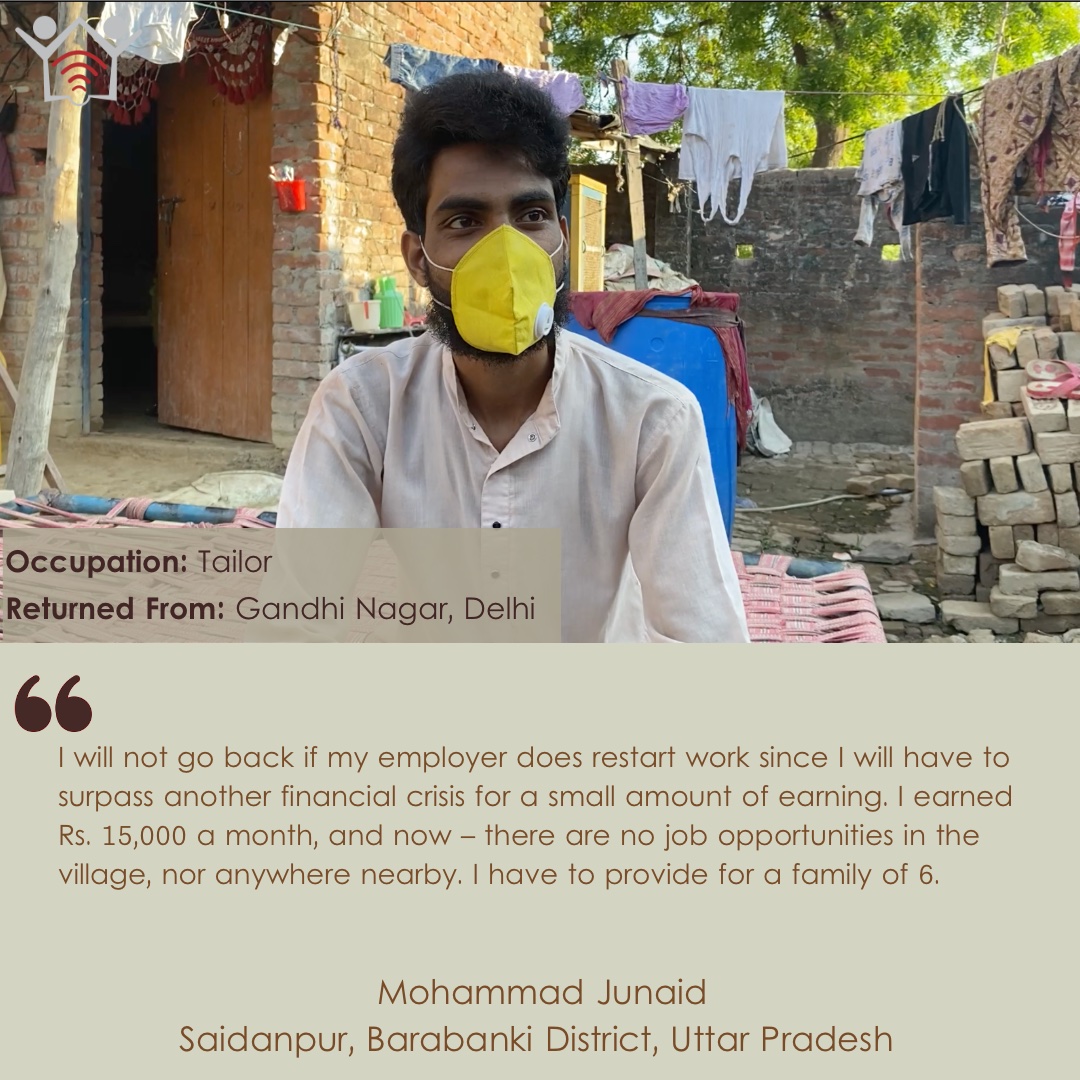 Interviewer: How was your lifestyle initially affected by the lockdown? How was your journey back to Uttar Pradesh?

Mohammad Junaid: I watch NDTV news on my smartphone. I first heard of the spread in January in Wuhan, China. Until there were local cases, I did not admit the severity of the virus. Nations such as Italy and the United States, with a smaller population than India, were weakened by the virus. With a population of 130 crores, I could only imagine the state of India.

I heard of the Covid-19 virus on television news in February as people were getting infected in various states. My work continued then. In the following days, the infection grew rapidly, our work slowed down and finally was shut down on the 22nd March. I was residing with my family in a rented room at the factory; my brothers, sisters, and parents. While the food was not a concern, covering other expenses was getting harder. Each extension of the lockdown caused a strain on our savings. Accepting the execution of lockdown for possibly the whole year, we left on 19th May.

I called the number provided by the Government registration facility, shared all information asked and waited for their call. Others around were leaving by renting private vehicles since there was no assurance of government-mandated ride. We too were desperate; I cannot wait and accumulate more debt.

An auto-rickshaw charged us Rs. 100 per person till the local bus station from where we boarded the bus to Barabanki. However, the police halted us at the Shastri Nagar police station for the evening due to orders from SDM instructing — to not let any commercial vehicle cross the Delhi border. At eight the next morning, an auto-rickshaw driver suggested we take a bus from across the border. It was upon reaching the Delhi border I realised —  the auto driver lied.

The bus stopped in Agra once at a ‘Dhaba’ as the policemen suggested we restart our journey in morning hours to avoid collision on the highway. Via Lucknow, we got off at Musaoli and hitched another ride to Barabanki. Our first visit was to the Pradhan Ji’s office where they sanitised us, followed by testing in Saroili, and home quarantine for fourteen days.

Interviewer: What has been your experience in the village since you have been back?

Mohammad Junaid: Initially, it was harder than being in Delhi. The locals referred to us as virus carriers and avoided any contact, regardless, we maintained our distance for the next twenty-one days. Now, the situation is not the same; they are no longer scared of us.

I will not go back if my employer does restart work since I will have to surpass another financial crisis for a small number of earnings. I earned Rs. 15,000 a month, and now – there are no job opportunities in the village, nor in Lucknow. Currently, I am exploring the possibility of selling clothes as I have to provide for a family of six. I do follow the news, but I have not noticed any government schemes that solves my problem. We console ourselves by accepting it as Allah’s wish.