Moti Mohammad is a mason worker from Jogapatti, Bihar. He moved to Delhi in 2017 to learn stonework. In early 2020, Moti had adequate experience in the craft and moved to Pokhara, Nepal. On 23rd March, Nepal declared a nation-wide lockdown stranding Moti and his younger brother. Without any assurance of employment in the near future, and concern about his family back home — Moti and his brother decided to walk back to Bihar. 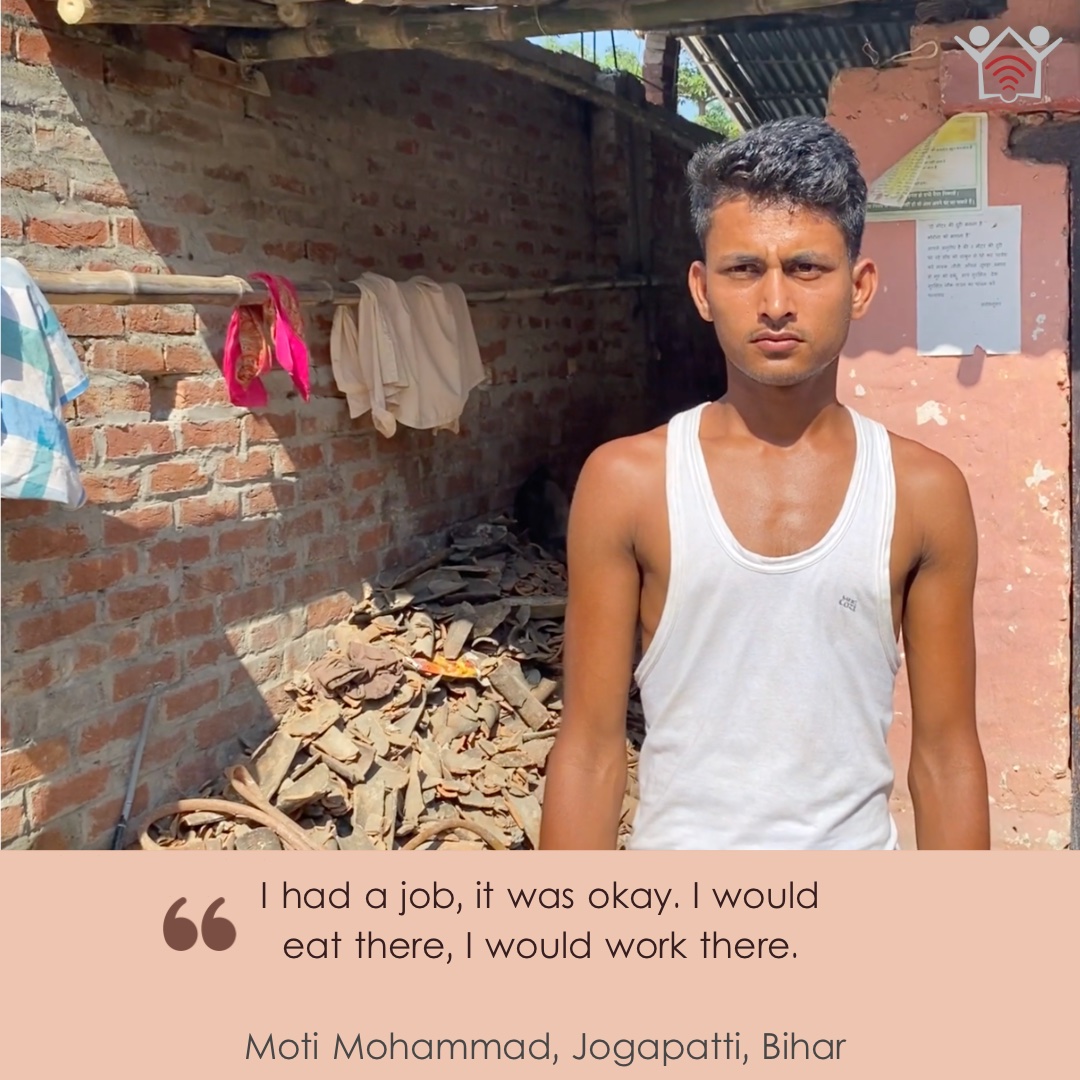 Interviewer: Before the official announcement of the lockdown, did you have any information regarding the virus? Did you use your phone to source information?

Moti: I heard about the virus in Nepal while the locals discussed it. I just use Facebook on my phone, I’m still familiarising myself with WhatsApp. Initially, we thought the lockdown would last two days. However, it was extended for two weeks, and further for another three-weeks. After a couple of weeks, we grasped the severity and decided to walk 350km.

Interviewer: How was your journey? What were the difficulties you experienced? Did you receive any assistance?

Moti: We began our journey at 5 in the evening and covered 50km. As we stopped to refill our bottles, the locals seemed frightened and chased us away because they believed we would infect them with the disease. Shop-keepers refused to sell us water, rather suggested a different store. We walked back and forth without procuring any water.

The hostile strangers demanded that we leave the area. We walked 100kms in 24 hours and finally rested with water and food. It was late in the evening when we got to Narayan Ghatt, Nepal. We had covered 165km by then and decided to sleep on the footpath. At around 3 am, we set afoot after filling our bottles. This route took us through the forest. Half-way through we took a break in a town. We continued walking towards the border where we were interrogated by the Indian border authorities. As the policemen asked for permission, the officer verbally abused us and did not let us cross the border. Through the help of others, we found a different route to walk through the forest where the border authorities did not harass us, and we successfully crossed the border. Our journey continued till we reached the school that was converted into a quarantine centre. Multiple people stopped to offer us a ride for Rs. 3000, but we barely had any money. 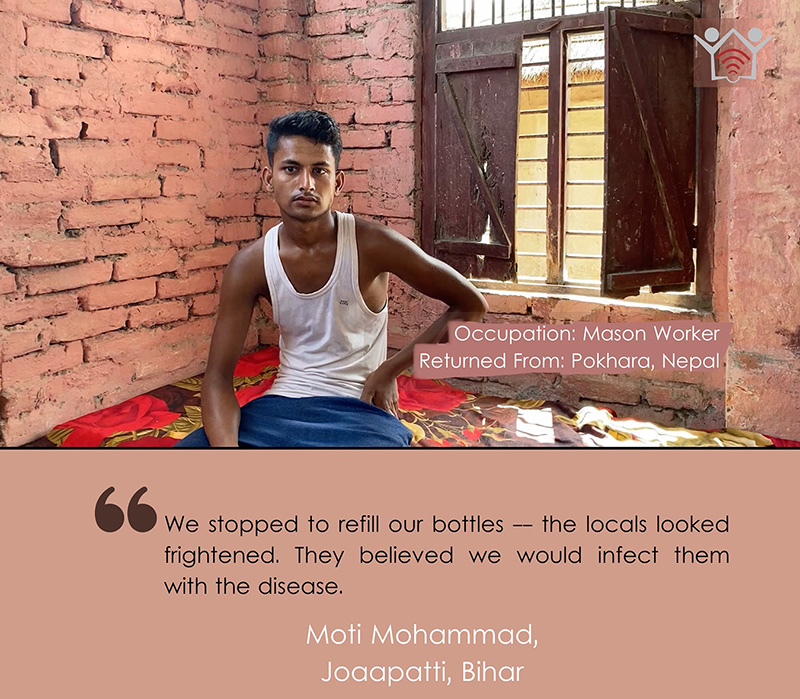 Interviewer: What was your experience like after you reached Bihar — Did you face any hostility from the locals? What have you been doing since you got back and how have the past few weeks affected you?

Moti: I had decided to get checked before entering  the village to avoid infecting my family members and the neighbours. We were then instructed to quarantine for twenty-one days in our respective houses. I stayed alone in the thatched house as the family continued living in the concrete house. Due to the walk, my feet were entirely bruised and blistered. It took about 22 days to recover.

There was not much work. I would help at the farm in exchange for some food. If the opportunity to leave was presented again, I would not be too keen to redeem it. I had a job, it was ok. I would eat there, I would work there. My employer in Nepal too asked us to leave and did not offer any help. I cannot face this kind of struggle again. I would rather make my living in my village and continue being with my family.

Interviewer: How has the pandemic affected you? Did you know there are government schemes to help you through it?

Moti: It took me a year and a half to learn the skills after which I headed to Nepal. There, I would earn nearly Rs. 500 in a day, however, securing a job every day was not easy. I earned Rs. 8,000 a month, and sent back Rs. 5,000. My expenditure wouldn’t be more than Rs. 2,000. There are six of us in the family to take care of. The youngest sibling(my sister) is still in school. My father earns Rs. 400 in a day, although the monthly amount is never fixed as his injured leg does not allow for him to work regularly. The eldest sibling (my brother), earns Rs. 10,000 in a month. However, he too encounters irregularity due to limited employment opportunity. I did hear about the schemes and tried to find out more about it but was not assured by my sources.