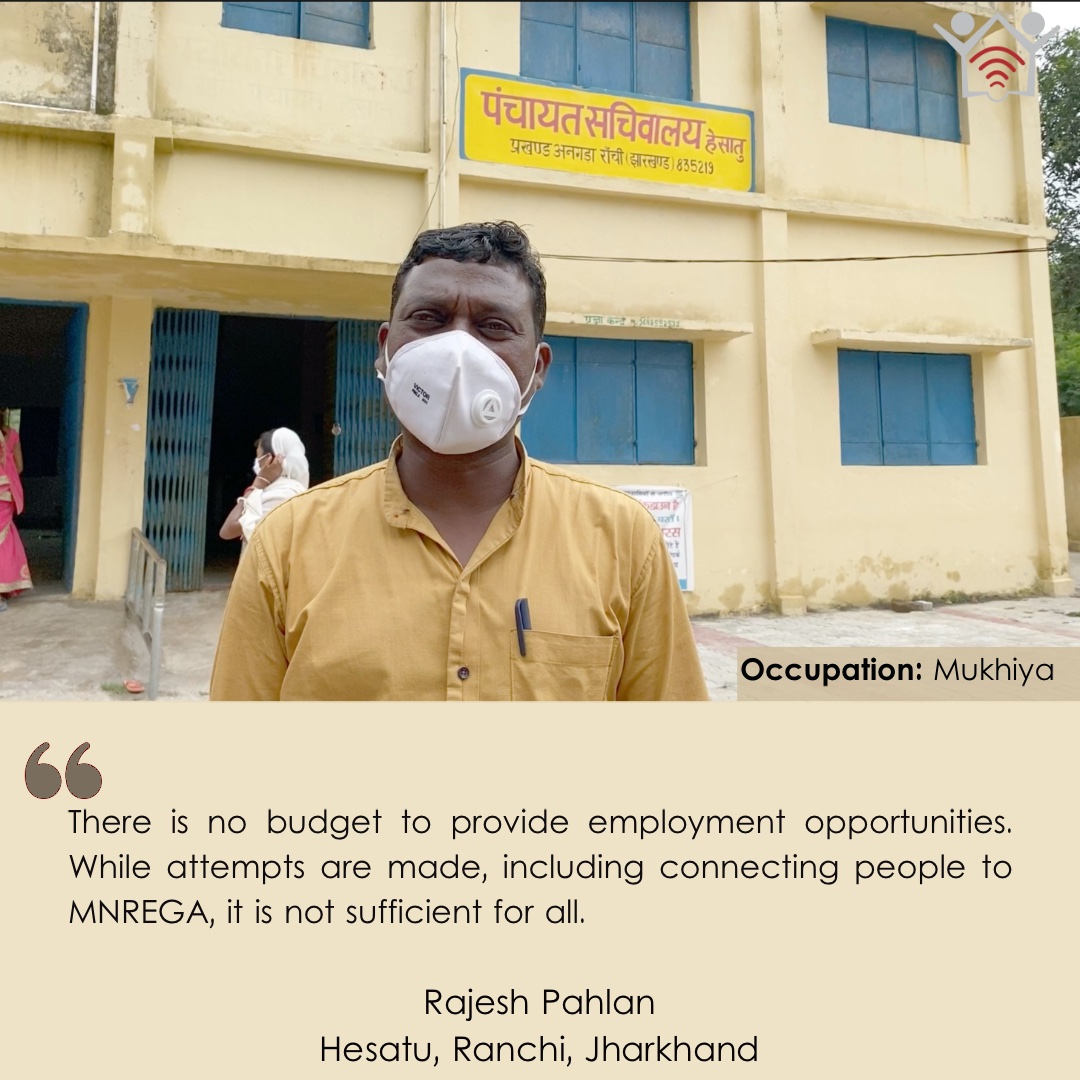 Interviewer: What resources and commodities did the government provide to the state?

Rajesh Pahlan: I received a letter instructing the Covid-19 measures will be done through a certain fund, in which there were Rs. 10,000 remaining. In addition, we were given two quintals of rice. No other funds were provided for the coronavirus. The letter detailed no guidelines, only to use one of the finance funds for those at the quarantine centres. We used the funds for the migrants with help from the block to give rice, ‘Dal’, oil, soap, and sanitizer. I would not call it optimal help, but we did the best we could.

The amount provided by the government is based upon the population of the village. On average, my village gets Rs. 50 lakh a year used primarily for fundamental problems. Water has been one of the recurring issues, and new roads were supposed to be built, although – the senior officials have not approved it yet.

64 migrants arrived in Hesatu of which, four were children. The one’s coming from green zones were instructed to home quarantine and those from red zones, quarantined in a government building. There were three requirements from the facility; water, food, and bathroom. There was only one in our village, out of which only four people required the government facility. We spent on the mattresses and chairs. The block officer allocates the food; I do not have much information on that. However, I am aware earlier it was Rs. 18 per person, and later, reduced to Rs. 10 per person. The labour department provides money for food.

Interviewer: What initiatives have you taken against the Covid-19 virus? Do you have any hopes from the government?

Rajesh Pahlan: The villagers indulged into untouchability due to the disease. While we spread the necessary information to remove the stigma, it did not receive a positive result.

I believe not enough samples were collected initially, and later, those quarantining should get tested after fourteen days instead of being allowed to return home. The essential facilities should have been ensured since not many have proper amenities at home. Most individuals who returned were scanned at the hospital, without the collection of their sample for a coronavirus test. Although we stayed in contact with the BDO to attempt the testing process, it could not happen.

Interviewer: Are there any solutions you are going to provide the migrants?

Rajesh Pahlan: There is no budget to provide employment opportunities. While attempts are made, including connecting people to MNREGA, it is not sufficient for all. Over two hundred workers now operate under MNREGA.

The village needs a source of water as the locals own small pieces of land often used to cultivate for either consumption or minimal earnings. I requested the government officials, yet they are to allow. The river Sonrekha passes along the village and can provide a definite solution. I submitted a proposal for Rs. 52 lakh for a well since the village has no source of water, but again – we await a response.

The allotted money is spent on roads and water primarily. About 1,200 feet of road in unfinished in the village and the PayJal facility runs on solar panels but, is yet to be fully functional. The whole panchayat does not agree with everything.

It is the last year of my five years term. It is not upon me to decide what to implement or how it is the government that asks us and provides funds for the same.