Rahul Maurya spent six years working on the assembly line at JBM in Mathura. He was well-informed about the virus because he remained updated through his smartphone, and the organisation conducted ‘Safety Diwas’ to spread information about the Covid-19 virus in early March. It was not until 24th March that Rahul became cognizant of the pandemic but continued to wait for work to resume. Two months later, his co-workers and friends started to depart to their villages. To avoid unnecessary risk, Rahul also decided to take a train back home. 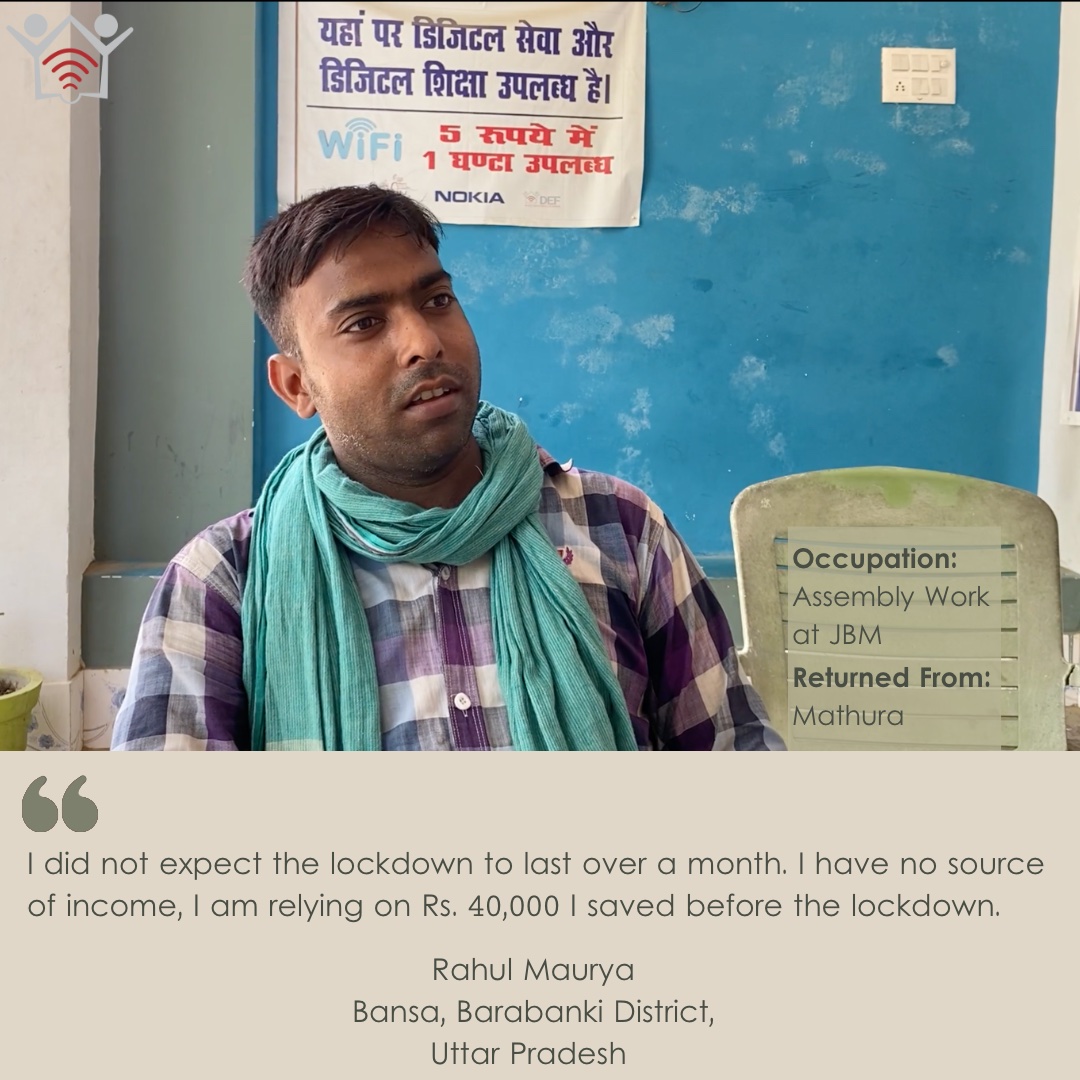 Interviewer: How prepared were you for the pandemic? How did you spend your following days?

Rahul Maurya: I updated myself through rumours and news on Facebook and WhatsApp applications in February. On the 4th of March, our company held a week-long ‘Safety Diwas’ to inform the staff of necessary precautions to be taken, and of its possible global spread. There was no worry at the time, we did not think it would spread this deep. Diseases are common in India, I assumed this would be one of many. We were mocking the virus by retracting our handshake and greeting with ‘namaste’ instead. Holi celebrations followed, and a warning against the use of Chinese Holi colours as they could be carriers. A similar advisory was issued when handling parts imported from China; a robe, gloves, and a mask are always to be worn to avoid direct contact.

I lived in front of a railway station and a few kilometres down the road there is a wholesale market where all the inter-state buses park. For the first few days, the supervisor called and assured the work would restart soon. The phone calls went on till the 18th of May. I could not blame them, the government had tight restrictions. I watched all other migrants leave for their homes from the railway station and at the bus station as I risked infection purchasing groceries. To avoid the unnecessary risk, I considered the announcement of the train to Barabanki that evening. The staff was looking to fill the seats. I along with others packed and boarded the train at 8 p.m. I safely reached late next evening.

At my arrival, I contacted the Pradhan Ji (Village Head) who instructed me to isolate for the night. The next day, I was tested for the virus and proceeded to home quarantine for the next twenty-one days. I quarantined at my empty house; the family would serve the food at my doorstep or I’d cook. I took all the necessary precautions during my quarantine including washing of utensils. The neighbours often inquired on phone or through my family regarding my state of health. I was to report fourteen days later, however, I decided to wait a few more days as some patients are asymptomatic.

Interviewer: Are you finding it difficult to manage without any source of income? Has the pandemic affected your lifestyle?

Rahul Maurya: I did not think the lockdown will last four to five months. I was hoping to fit a short visit to the village during the curfew, I did not expect a complete shutdown. I never harboured thoughts of insecurity as far as my employment status is concerned. My last six years have been in the same organisation. Before, I worked at Tata Motors in Lucknow until a supervisor from JBM offered me a higher-waged position. I have been here ever since.

Out of my savings, I spent Rs. 20,000 in the two months stranded in Mathura, and I’m holding the rest. I earn Rs. 18,000 a month, and they owe two months due. All the staff is said to receive the two months’ pay once the company restarts. I am waiting to attend a marriage in my family and leave in the next twenty days. The company guidelines require me to quarantine for a week before entering the premises. I am looking for a viable mode of transportation in the meantime.