Rajan Kumar married after graduating high school. The pay at the time in Gonauli, Bihar was Rs. 3,000 through miscellaneous jobs at shops. Raj Kumar, Rajan’s brother, holds a B.A. degree yet is not able to find employment with adequate income. On 17th March 2020, the two arrived in Vadodra, Gujarat, and Delhi. Three days later, everything was shutdown. He was left with a total of Rs. 1,000, Raj approached the police for reservation in the train back to Bihar, and Rajan looked for alternatives. The process was delayed plenty, however, Raj paid Rs. 700 for the seat ordinarily available for Rs. 400. Furthermore, the tickets were to be free. Rajan contributed to rent a truck with his housemates and began the journey to Gonauli. 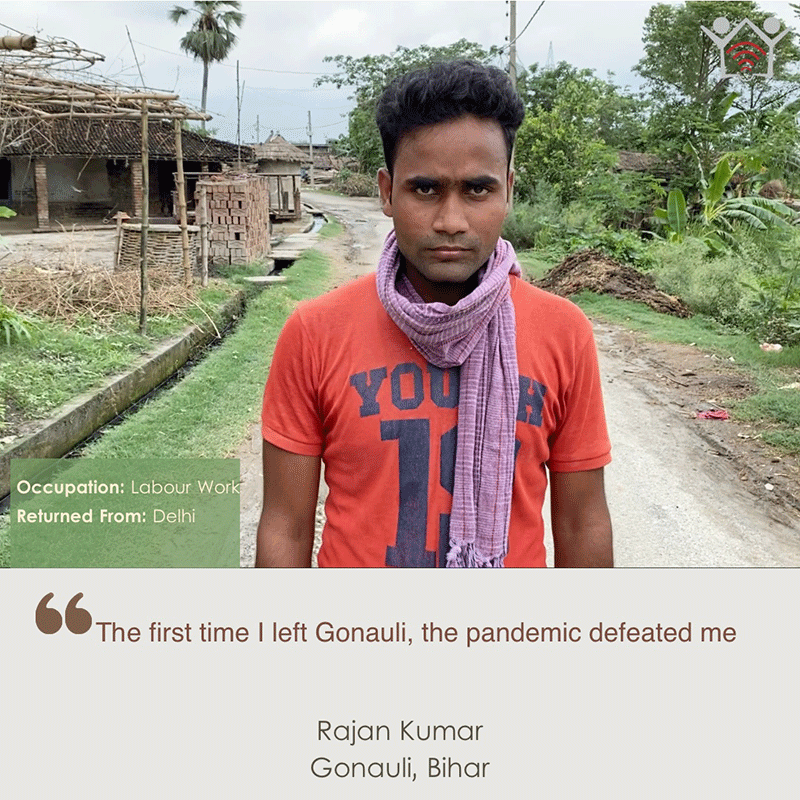 Interviewer: What was your initial reaction to the Covid-19 virus?

Rajan Kumar: I was in Delhi working at the beginning of the year. I watched television news for information regarding the Coronavirus. Since there were no cases in India, I mocked the virus along with others. We both left for Bihar at the end of January and spent the next three months at home. It was on 17th March 2020 we reached back.

Raj Kumar: I needed a job that would pay well. I attempted to apply at the Railways and local Police station. Neither of the two worked out. I had to leave. There was a disease in China; I safely assumed it would contain itself. A lockdown imposed on the entire country; I was not calculating for that.

Rajan Kumar: The company and P.M. Modi’s speech were the first we heard of the curfew.

Raj Kumar: We requested assistance from the manager to which he declined and further refused to recognize us. There was rent to be paid, vegetables, and rice to be bought. The Supervisor backed the company owner. We reached the stage where there was no income, yet the consumption for survival continued. It was then that we decided to go home.

Father: I have limited information about the virus from television news and through my mobile phone. I did not go to school, but I know the reasons Rajan and Raj were in Delhi do not apply anymore. What is the point of being there if there is no income or food? I asked them to come home and help on the farm to generate finite income. It is better than nothing.

Interviewer: How was your journey? What were the incidents you encountered?

Rajan Kumar: A one-day curfew, another nine-day lockdown, followed by a 14 day lockdown. Besides, there were six or seven active cases in the neighbourhood. To purchase vegetables, we had to risk being in the midst of a crowd. The landlord cut our electricity as we were not able to pay the full rent. The ration was not accessible, and the moneylender was not sure whether or not we will repay the debt; thus, he cut us out. There were government subsidies for food, water, and other necessities, yet none reached us.

Raj Kumar: The drivers for hire needed Rs. 5,000 for fifty people in the confined back of the truck. I was dependent on my neighbours for food, and the landlord permitted me to live rent-free for the time. He too was struggling.

I heard the trains were free. I walked 18 k.m. to the police station, who guided me to the Sarpanch (Village Head). He was polite. The date of departure was pushed twice, and, in the process, I was checked twice. According to the official authorities, “it was due to lack of funds by the Bihar government.” Two weeks later, after being tested for the third time, I was told the Bihar government has approved our return. On a normal day, it costs Rs. 400 for one ticket. Although the tickets were to be free, the Panchayat charged us Rs. 700. Besides, we were not given proper meals. The first meal: bread, vegetable curry, and water — was given in Patna and another rotten meal in Muzaffarpur. There were 1,400 people; two individuals or more were made to share the larger seats at a few spots. At the stations the train stopped, some individuals were able to purchase food and water. My situation was worse since I was placed in the last passenger coach, and the food would finish by the time it reached me.

Rajan Kumar: I did not choose to wait for the train, it would have taken a while. However, my landlord too was pestering us to leave or pay the rent. My flatmate convinced a truck driver to drive us to Gorakhpur for Rs. 2500. The fifteen of us were stopped at a check-post, but there was no fear. The policemen searched the vehicle and allowed us to continue with our journey. Our first meal was ‘khichdi’ on the second day when we stopped for rest in the evening.

The drive from Gurgaon, Haryana to Gonauli, Bihar took one day and two nights. The driver took longer routes to maintain discretion, however, one of the policemen at the check-post who stopped us only inquired. He suggested we do not take more passengers as that might lead to other officers to seize the vehicle. All our viable sources recommend we get tested and carry a certificate as coverage. 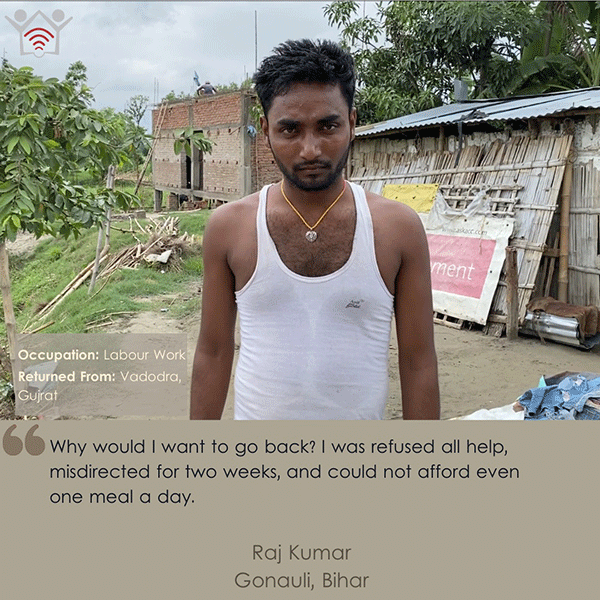 Crossing through Jagdishpur, we were dropped at Kushinagar. The next 6 k.m. was covered by foot. An auto charged us Rs. 50 for every 10 k.m. till almost the Bihar border, and further, we covered 80 k.m. to MGK hospital. I could not persuade the ones who already helped us to provide the service for free considering the situation. All migrants are going through the same struggle. They need to eat and live too.

The doctors checked us and instructed us to quarantine at home for 21days since there was no space available. I requested the policemen and Sarpanch (Village Head) for an empty room because I had no infrastructure either. The cleaning staff refused to attend to us in the cleaning process to avoid contamination. We continued to maintain hygiene.

Raj Kumar: I reached earlier than Rajan. A state-sponsored bus drove us from Muzaffarpur to the quarantine center that happens to be a recently built jail for children. The next fourteen days were not as bad as they could have been in Vadodara. The provision of food was irregular; a meal for breakfast and one for dinner. It was dal and rice. Furthermore, they did let us bring home food.

Interviewer: How has your lifestyle been since you got back? Have you referred to any government schemes?

Raj Kumar: Why would I want to go back? I was refused all help, misdirected for two weeks, and could afford one meal a day.

Rajan Kumar: I would go back for work in-case no opportunity is available in Bihar, although not this year. I spoke with other locals, and they agreed to update me on a potential opportunity. The first time I left Gonauli, the pandemic defeated me.

Raj Kumar: I am looking for a job too. I will do any job as long as it covers the family expenses. My chances for local opportunities have reduced due to a hand injury. I will apply for a position at the Bihar Police-station once more. I need the money; the virus has strangled all available sources of income.

Rajan Kumar: This was the first time in my life I was hoping to achieve set goals, but the pandemic ruined every aspiration.

Raj Kumar: We own the land our home is on, and a cow. Our last resort is to start a business together without the interference of state banks.