Dharmendra Mahto, one of the fifteen members of the family, spent his first three months of the year in Nellore, Andhra Pradesh. He drove in the radius of 4 k.m. The lockdown suppressed his only source of income not allowing him to purchase essential commodities. With only Rs. 4,000 remaining, and restricting his consumption to one meal a day, Dharmendra spent his savings on a bicycle that would ease his 15 day journey. 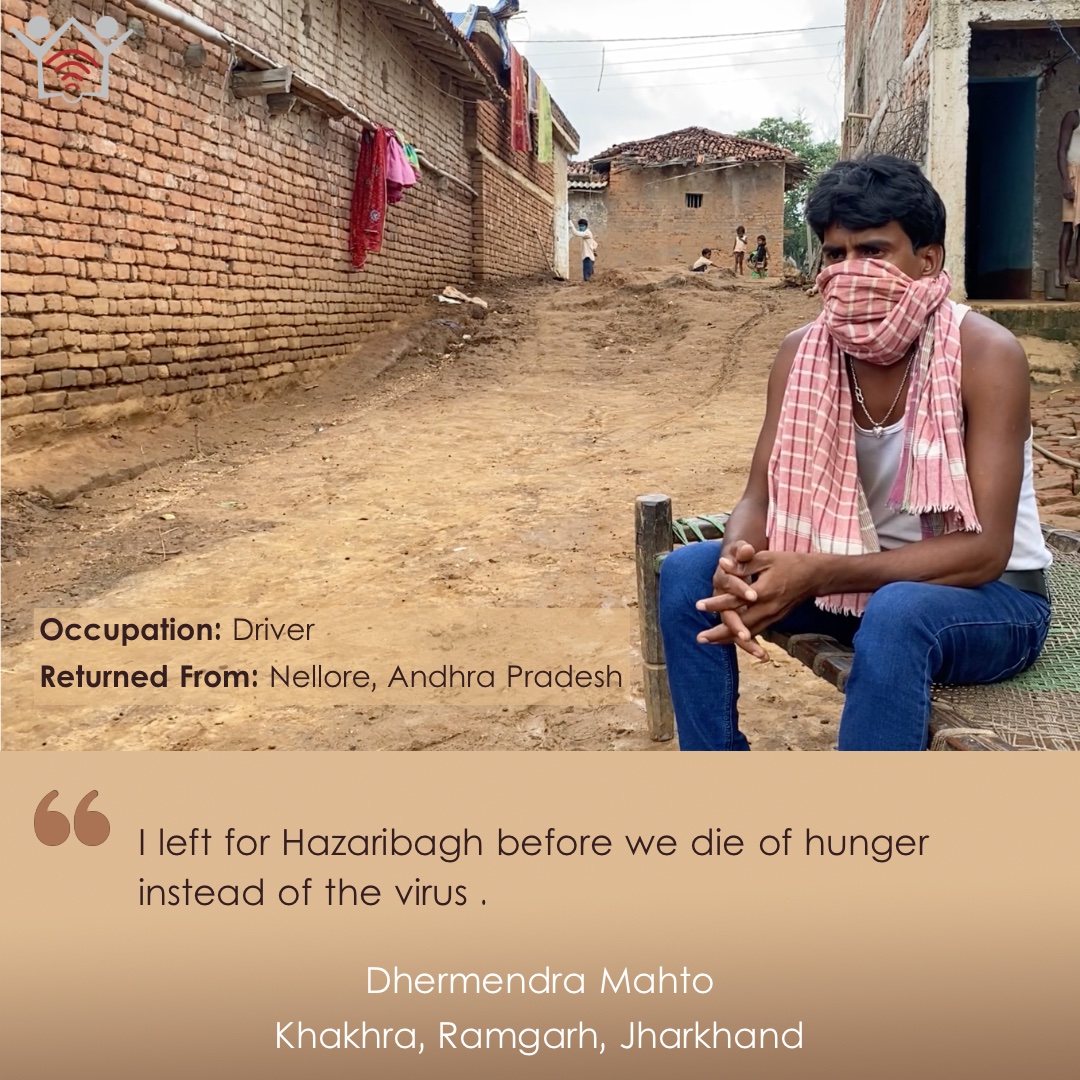 Interviewer: What was your first reaction to the pandemic? Share the details of your journey back home. Did you quarantine?

Dharmendra Mahto: I had a small phone; I could only make and receive calls from it. I first heard about the virus as panic broke in the village I was residing in at the time. I was being told to go isolate myself in my room, wear a mask, and maintain distance. No one was being explicit with their information. “Corona has come” was the expression going around. The villagers voiced their concern by insisting all outsiders to leave the village and return home for their safety. I asked around for more information. I was told it is a pandemic that spreads by touching; continue maintaining 1m distance from everyone.

My only source of income shut-down despite government asking all employers to continue paying salaries. The inconvenience was obvious as my food consumption had drastically reduced. I would have meal a day. After a thorough deliberation, the ten of us from Hazaribagh decided to leave before we die of hunger instead of the virus. If I were to die, I would prefer to die at home. I was left with Rs. 4,000 after spending a portion of the earnings on food during the lockdown. We were all in a similar predicament. The wisest decision was to purchase bicycles from the left-over money and begin our journey.

On 2nd May at midnight, we began riding our bikes. The sun was excruciating in daytime, we had previously planned to cycle in evening and morning hours, and rest under shade through the afternoon. We covered 40 – 50 k.m. from midnight to 10 a.m. by cycling continuously. This was the routine for the next fifteen days.

Food was irregular. Every 10 k.m. or so, we would possibly get a banana, not a proper meal. The restaurant staff would chase us away if we attempted to request for some food regardless of whether we paid or not. In Andhra Pradesh, a policeman stopped us and gave Rs. 2 biscuits for fourteen of us. We were able to convince him to organise us one proper meal as we had been starving for days. He said you can eat at a restaurant 10 k.m. ahead, he had contacted the owner. We sat and ate. We presumed the meal was free, however, the owner asked us to pay at the end. I spent my last dime on this cycle, there was nothing else to give. We offered our only possession, and after a few minutes, he acknowledged our struggle and we continued our ride. There were numerous incidents concerning food. No stranger was comfortable allowing us inside their property. The decision to ride bicycles instead of public transport was solely based on avoiding contamination. The Odisha police lured us by offering food but instead ‘lathi’ charged us and abused us. We initially tried to abandon our bicycles and run, nevertheless, they allowed us to take our rides and leave.

At reaching the Jharkhand border, we were relieved. There was a sense of security. The villagers from Tatanagar too were hostile and threatened to call the police. We further pushed for them to call the police, thinking, perhaps they could assist us. I was checked at the quarantine centre in Gola, Jharkhand, followed by self-quarantine for the next fourteen days. The ‘Mukhiya’, ‘Sarpanch’, and other villagers were not troubled about my spreading of the disease. I decided to isolate in an unconstructed room on our land for fifteen days.

Interviewer: How has the virus impacted your lifestyle?

Dharmendra Mahto: I left for Andhra earlier this year, but I’ve been working outside for six years now. My parents aged taking care of me and my siblings. It was after finishing my 10th grade I was obliged to support my father along with my older brother to put food on the table.

I worked for a small organisation that owned three vehicles for hire. I would be responsible for transporting from and to the mines. I first arrived with others from the village as a helper earning Rs. 4,000. I concluded it would be higher waged if I worked directly avoiding all middle-men. I was able to bring-in Rs. 8,000 to Rs. 10,000 depending on the requirement for the month.

My family has counted on the one and a half acre land for a years now. Once a year, my father can harvest grain and during fitting season, potatoes. The crop is sold for oil and masala, and a portion of it for personal consumption. The fifteen of us can manage on Rs. 6,000 a month, however, I am not too sure about that.